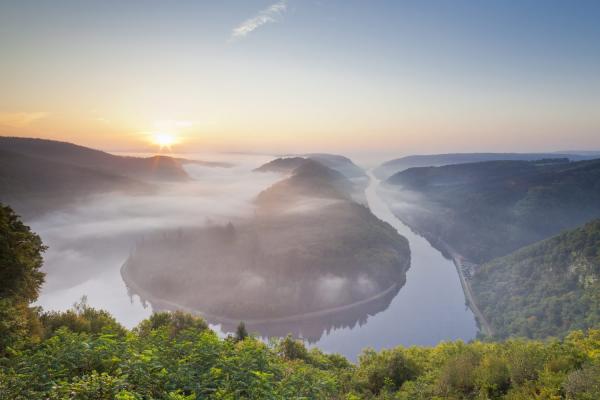 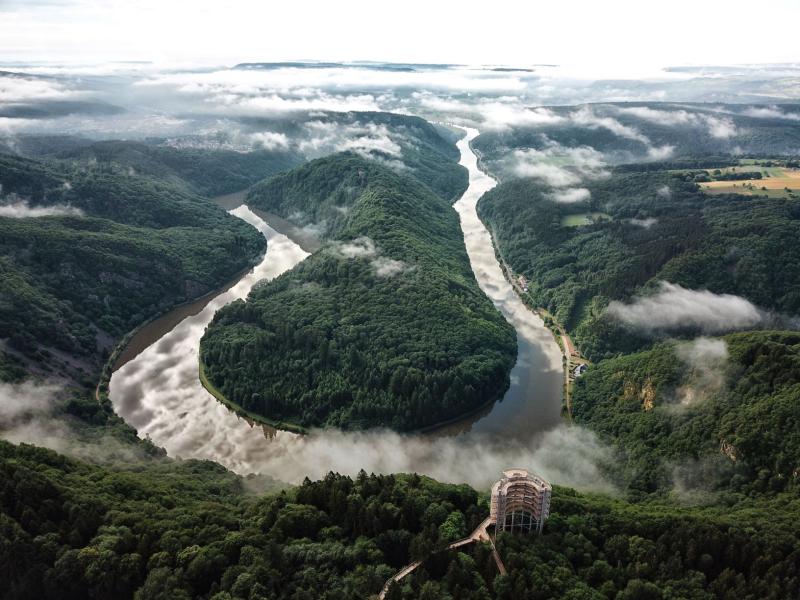 The 42-metre-high tower of the tree top walk provides excellent views of the Saarschleife. Thanks to the low gradient and the absence of stairs, it is also accessible by wheelchair or with a pram © Andreas Treitz

The Saarland is one of Germany's most densely wooded federal states with beeches, oaks and Douglas fir trees galore. Above the rocky Cloef viewpoint in Mettlach-Orscholz, the Saarschleife tree top walk, opened in 2016, winds its way higher and higher. Visitors walk up ramps to the platform of the 42-metre-high tower, whose modern wooden construction is as unique as the view of the Saarschleife river loop, Saarland’s number one landmark. Perfectly formed and framed by the green hills of the Saar-Hunsrück Nature Park, this wondrous river bend has already inspired Frederick William IV, King of Prussia, and the French poet Victor Hugo. You can find out where it got its unmistakable shape and how it was created at one of the 22 learning stations, which are scattered along the serpentines as you walk through the treetops. A wobbly bridge and slide make things even more exciting. 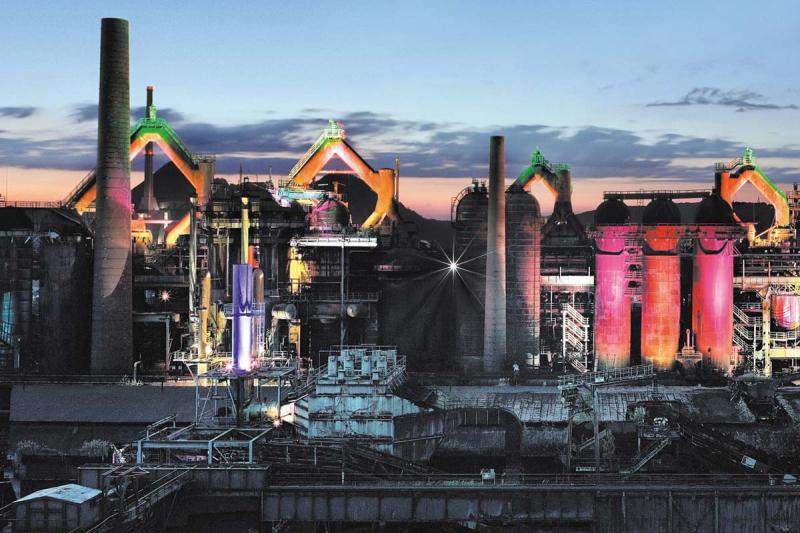 The Egyptian pyramids, the Great Wall of China, the Great Barrier Reef in Australia and the Völklingen Ironworks in Saarland have one thing in common. They all are UNESCO World Heritage sites. Climbing up to the blast furnace viewing platform at a height of 45 metres and looking out over the industrial landscape of the Saar, you will realise why this remote spot close to the French border is a special place. The ironworks, founded in 1873, is the world's only iron and steel industry plant still completely intact. In 1928 one of the most modern sinter plants in Europe was built here, which is today the UNESCO Visitor Centre and entrance hall of the world heritage site. There is plenty to discover between the blower hall with its gigantic flywheels and the 70-metre-high gasometer. The site also features the "ScienceCenter Ferrodrom®", a multimedia experience all about iron and steel. Völklingen Ironworks invites visitors to dive deep into its world. It is also an exciting cultural venue for major exhibitions, concerts and other events. 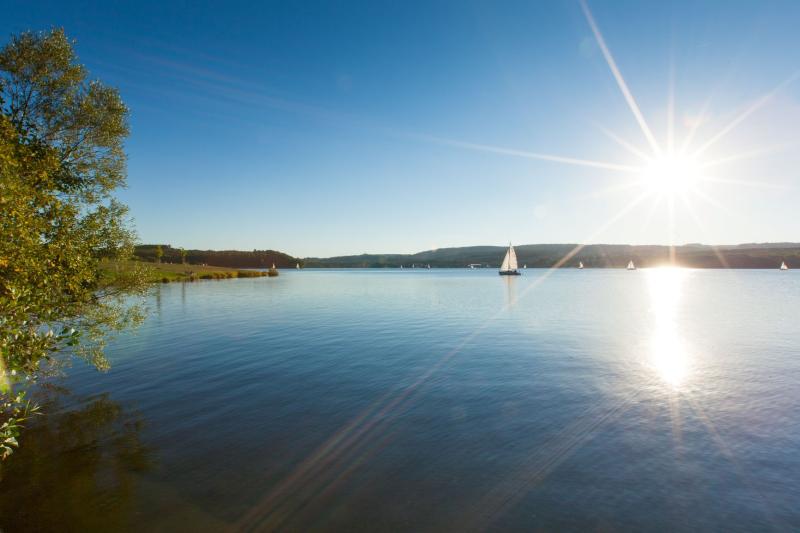 Bostalsee lake is situated in a corner of the Saarland called Sankt Wendeler Land where there is, actually, no water. However, this large swimming lake was artificially created in 1982 and has long been a favourite spot on sunny days and balmy evenings because of its secluded lawns for sunbathing and sandy beaches as well as the many water sport options it provides, including a harbour. No matter whether you prefer to chill out or be active, in, on and around the lake everyone will find something to do, be it swimming, beach volleyball, surfing, sailing, canoeing, diving, pedal boating or fishing – there is a huge range of leisure activities. Alternatively, you could get on a bike for a ride on the "Panorama Trail" (approx. 4.25 miles) along the shore, to enjoy views of the hilly surrounding landscape first and then relax with a refreshing drink in a beer garden.

HIGH UP ON THE SAARPOLYGON 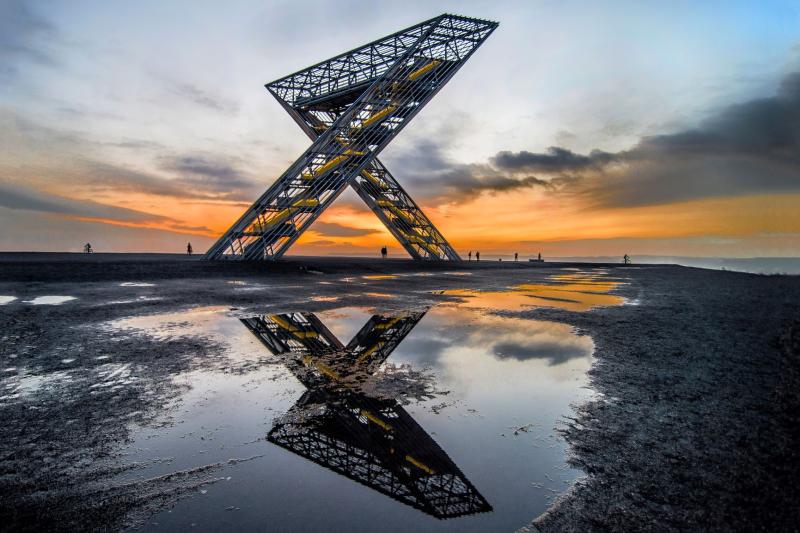 Rectangular archway, cross with a horizontal line, triangle or the Greek letter lambda –depending on your point of view and angle, the Saarpolygon looks always different © Alois Schuhn

As is we all know, everything is a matter of perspective. The same applies to the so-called Saarpolygon in Ensdorf, near the town of Saarlouis. The 30-metre-high steel monument is designed in such a way that it takes on a different shape from every angle. Sometimes it appears as a rectangular archway, sometimes as a triangle standing on its apex or as a cross with a horizontal line. In other words, a polygon. To commemorate the era of coal mining in the Saarland, which came to an end in June 2012, the structure was inaugurated four years later. The large sculpture stands on the slag heap of the former mining area in Ensdorf and rises some 150 metres above the surrounding Saar valley. The best thing about it is that it is not only eye-catching from all directions but can also be properly explored by visitors. 132 steps on both sides lead up to a viewing platform on top. By the way, the slag heap is also the official take-off point for paragliders.

BIODIVERSITY OASIS IN THE BLIESGAU 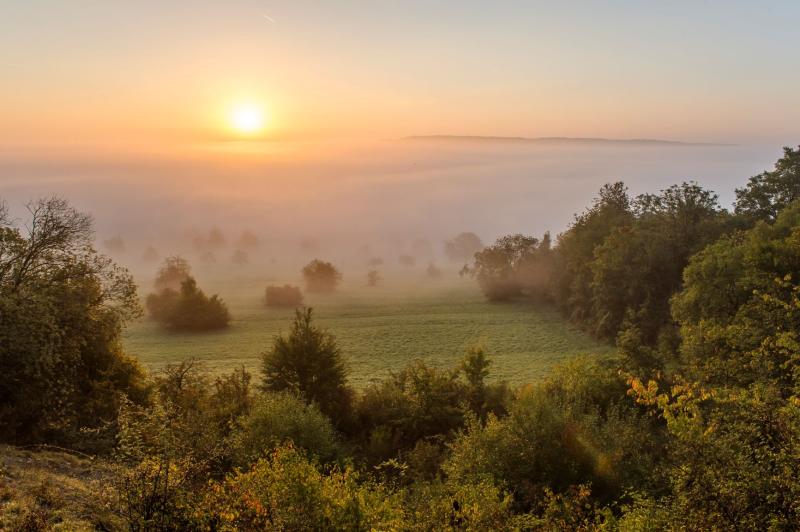 Large orchards with gnarled apple and plum trees, extensive beech forests and charming meadows with flocks of sheep characterise the gently rolling Bliesgau landscape in the south-east of the Saarland right next to France. It is criss-crossed by the Blies, the eponymous river of the Bliesgau UNESCO Biosphere Reserve. This international model region – one of only 16 areas in Germany with this title –  features an impressive variety of natural treasures. For example, half of all orchid species found in Germany grow on the shell limestone soils near Gersheim, be the rare bumblebee ragwort or the broad-leaved helleborine. Tip: Try the circular trail leading across the swamp meadows, which are at their best in the main flowering season in early summer. The endangered marsh frittilary butterfly has also found a home here. If you're lucky, you may spot traces of beavers that are native to the wild and romantic Bliesgau meadows. Or even an endangered stone owl.

DIVE INTO THE WILDERNESS OF HUNSRÜCK-HOCHWALD NATIONAL PARK 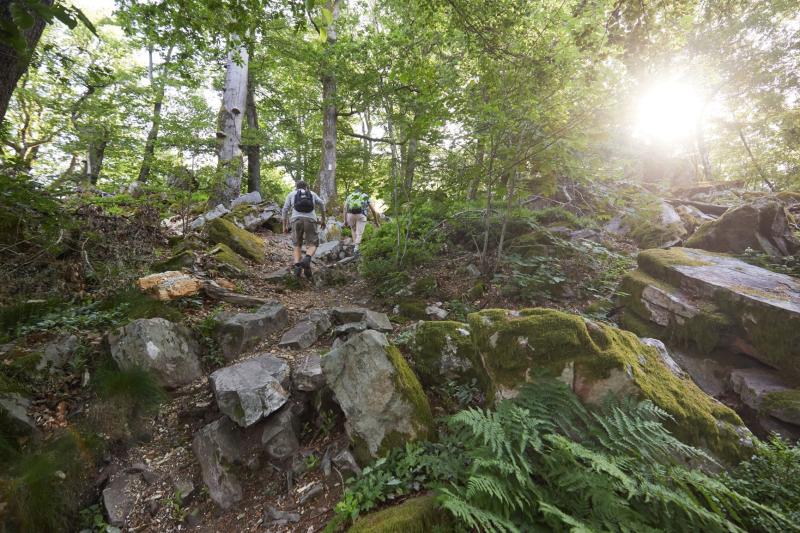 There’s no need to travel to far-away exotic countries to get the “jungle feel”. Saarland’s Hunsrück-Hochwald National Park, covering more than 10,000 hectares, is there for the roaming. You can spent hours in its green thicket without meeting a soul but instead all the more rare plants and animals. The secluded biotope, which stretches across the high altitudes of the Hunsrück region between Saarland and Rhineland-Palatinate, is home to the black stork, boreal owl, black woodpecker, Bechstein's bat and the endangered wild cat. Between the mountain streams and mossy trunks of the beech forests and wetlands, sundew, royal fern and cranberry grow. A proper hotspot of biodiversity. You can discover it, for example, on some circular routes, the so-called "dream loops". Or on the Saar-Hunsrück Steig trail, which runs right through the national park and is perfect for diving into this fascinating, mysterious wilderness. A proper retreat, not only for flora and fauna.

Keep in touch with us